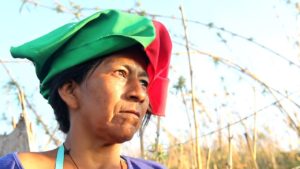 This project will take a look at the lives of a handful of survivors of the 2001 el Naya masacre, in which approximately 200 paramilitaries violently murdered a still largely unknown number of indigenous men, women and children (somewhere between 40 and 130). This massacre was one of the most horrific attacks in Colombia’s cocaine war and left millions of civilians displaced. This project will give us an insight into their lives after this event, and their continued longing for the lands from which they came.

While deciding on the type of text I would choose to translate, I decided that if my goal was to translate the story of the survivors of the el Naya massacre, this story would need to be in documentary form. The main advantage of this for my translation is that I have benefitted not just from the words spoken by the indigenous people interviewed in the documentary, but also from their non-verbal cues and the emotion to be heard in their storytelling, which has granted me a deeper understanding of the significance of the topic that I am translating. Although transcribing the documentary has been one of the most difficult aspects of this project, it has trained my ear to the Colombian accent and enabled me to familiarise myself with the differences between the Spanish I have learnt and Colombian particularities. The FIBABC’s website (Festival Iberoamericano de Cortometrajes ABC) provides a platform for all Spanish-speaking small directors to share their short films and led me to the work of Colombian Ana María Gómez Quintero, who directed the twenty-four-minute-long film I used as my source text in this translation project.